How Long Does Clavamox Stay In Dog’s System?

Our today’s topic is all about Clavamox half-life and the amoxicillin trihydrate and clavulanic acid pharmacokinetics. In the following section, I have provided interesting information about Clavamox’s availability in the blood-stream of dogs after oral administration.

How Clavamox Get Absorbed In Blood-Stream?

So, here I tried to provide a complete piece of information that how Clavamox affects a dog’s body?. When a 10 pound (weight) dog administers Clavamox 62.5mg chewable tablet orally then this will happens to its body.

A half-life of a drug is defined as the time required to eliminate 50% of the drug from the body. Clavamox has a half-life of almost one hour, more precisely 61.3 minutes. It means within one hour of oral administration or after the one hour of when the drug gets a peak (higher concentration) level in the bloodstream, the 50% amoxicillin trihydrate and clavulanic acid got eliminated through the body.

If a dog has administered a 62.5mg dose, then after approximately one hour of oral administration, the actual value of amoxicillin trihydrate and clavulanic acid reduces to 31.25mg into the bloodstream of a dog. The percentage of medicine eliminates consistently after every half-life through urine.

The Time Clavamox needs to Completely Eliminates by the Body

A drug (defined as a foreign substance) or medicine takes a time equal to their Five (05) half-life’s to completely (more than 95%) eliminate through the body. As I have told you, Clavamox (amoxicillin trihydrate and clavulanic acid) has a half-life of one hour. It’s mean the percentage of amoxicillin and clavulanic acid in the bloodstream decreases by 50% in every one hour (after administration).

If a dog takes Clavamox 62.5mg, not matter whether is it a chewable tablet or liquid suspension, amoxicillin (a semisynthetic antibiotic), and clavulanic acid (beta-lactamase inhibitor) break down by the body and enters into the bloodstream directly or via lungs or stomach cells.

After the One hour (half-life of Clavamox) of oral administration, the actual 62.5mg dose decreased by 50% and it became 31.25mg in the bloodstream of the dog’s body. The process of blood detoxification done through the liver and kidneys remains consistent and eliminate 50% of the amoxicillin and clavulanic acid constantly after one hour.

Every medicine has a different half-life (time which decreases the actual amount of administered medicine to 50%). For instance, marbofloxacin (a veterinary antibiotic) has a half-life between 7-9.5 hours. So, marbofloxacin may takes more than one day and 11 hours to eliminate from the dog’s body.

So after 02 hours of oral administration the amount of amoxicillin trihydrate and clavulanate potassium in the bloodstream remains 31.25mg then in 03 hours it goes down to 15.625mg, after 04 hours it becomes 7.8125mg and after 05 hours it may turn into 3.9mg.

Chart Shows: How Long Does Clavamox Remain In Dogs Bloodstream?

Clavamox contains amoxicillin trihydrate and clavulanic acid composition. It has a half-life of almost 61.3mg or one hour. Commonly drugs may take a time equal to  5-6 times of their half-life in the bloodstream of a body. It is considered that after 5 half-lives, more than 90% of the drug gets eliminated by the body (by the blood detoxifiers i.e, liver and kidneys).

So below is the complete data on how Clavamox removes through the dog’s body?.

Hopefully, the above chart has explained to you how Clavamox half-life helps us to understand the stability of amoxicillin and clavulanate potassium into the bloodstream of dogs. 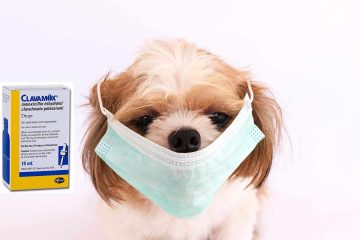 Is Clavamox the Same as Augmentin

Often Dog Owners ask if Clavamox is the Same as Augmentin, the reason is that Augmentin is often used in Humans for Bacterial Infections. Many people have a leftover package of Augmentin at home. Is Read more…

Is Clavamox a Penicillin? Things to Know Before Taking It

Nowadays, there is a vast list of medicines available (in the market) to safely treat infectious diseases in canines. More of them (antibiotics) are FDA approved drugs that efficiently treat a broad range of bacterial Read more…

Does CLAVAMOX Have To Be Taken With FOOD?

Every dog owner remains conscious about his pet’s health and always tries to do the best for his best friend. Veterinarians prescribe antibiotic drugs for canines that help them to fight against bacteria in their Read more…