Does ASPIRIN Reduce Fever In Dogs? SAFE NSAID For Pets?

In the following piece of article, I am going to share with you a secret pill (probably available in your medicine box) that can easily treat fever in canines

, especially in dogs. Aspirin or acetylsalicylic acid is an NSAID (Non-steroidal Anti-inflammatory drug) used to remedy pain, fever, inflammation, or swelling and blood-clotting in both humans and animals.

It’s not an FDA (Food and Drug Administration) drug to use in animals but veterinarians suggest baby aspirin (low doses) as an off-label drug for animals. 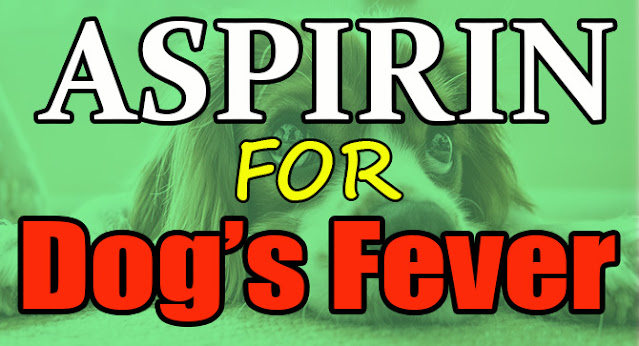 Aspirin For Fever In Dogs

Acetylsalicylic acid helps to lower high-grade temperature (that is above 39.16 degrees Celsius or 102.5 degrees Fahrenheit), in canines. It’s a simple and inexpensive way to get rid of high-grade fever. You can surely use this (ASPIRIN) over-the-counter drug for your dog.

This is the most important section of this article because you must be aware of the right dosage of aspirin for your pet that can help to decrease temperature.

You can give 10mg/kg to 20mg/kg acetylsalicylic acid to a dog twice daily (two times a day) that is suffering from fever. It means the right dose of aspirin for a 5KG dog should be between 50mg (minimum) to 100mg (maximum).

Acetylsalicylic acid tablets are available in dispersible and enteric-coated forms. Human aspirin is available in 325mg and 300mg strengths. However, baby aspirin (81mg and 75mg) tablets, one-fourth of aspirin strength 325mg and 300mg, is a more suitable dosing form to consume for dogs.

The dispersible form of aspirin is the more reliable and preferable way to administer the dose. But in some dogs, the dispersible tablets can upset the dog’s stomach easily. So in that case enteric-coated tablets can help to avoid stomach problems.

How To Administer Aspirin In Dogs?

As said before, this drug comes in two different dosing forms i.e, dispersible and enteric-coated tablets.

In the case of Dispersible tablets, select the right dosage amount (tablet) and dissolve it in a few drops of water (5ml to 15ml). You can also use a disposable syringe (after removing the needle) to administer the dose (if you find it crucial and easy).

Always give aspirin to your pet on a full stomach. It’s the best way to avoid some common side effects of any administered drug on the stomach.

If your dog is allergic to NSAIDs (non-steroidal anti-inflammatory drugs) like carprofen (RIMADYL), ibuprofen, naproxen, and celecoxib, etc there is a strong possibility of getting adverse reactions.

Overall, it’s a safe drug that can be used to treat pain, fever, and swelling in dogs. The thing you must follow is the Right Dosage Plan Of Aspirin For A Dog.

Overdose of acetylsalicylic acid can be toxic for a dog’s body and may also cause death in small animals including cats, rats, etc.

Aspirin For Pregnant Or Nursing Dog

This drug also acts as a blood thinner. Acetylsalicylic acid is not suitable for pregnant or lactating/feeding dogs. It’s suggested to avoid ASPIRIN in child-bearing canines and felines.

Side Effects Of Aspirin In Dogs

I have already said that Acetylsalicylic acid is not a veterinary-approved NSAID drug. But due to its efficacy and good feedback veterinarians suggest it (in small amounts) to treat high temperature (fever), pain and aches, inflammation, and blood clotting, etc.

However, this drug may show up some side effects or unpleasant consequences in a few ones. The most common side effects of using aspirin in dogs are the following;

The term “half-life” means the time at which half the amount of administered dose would be excreted through the urine. Acetylsalicylic acid has a half-life of 2-3 hours (when taken in small doses i.e. below 100mg).

It means if a dog has administered 100mg of aspirin, the actual amount of drug after 2-3 hours would become 50mg. Then in the next 2-3 hours, the dose amount would become 25mg and so on.

Aspirin (C9H8O4) or acetylsalicylic acid is an NSAID (a non-steroidal anti-inflammatory drug) that is used to treat fever (moderate to high-level temperature), pain, and blood clotting in humans and animals.

This over-the-counter pain-relieving medication can be used in canines and felines but with extra care as it’s not an FDA-approved drug for small animals. Its overdose may cause fatal consequences and severe side effects. Acetylsalicylic acid toxicity can be life-threatening.
Categories: dogs fever

If you’re a dog’s owner, then it’s crucial for you to know about common sickness, i.e, dog fever, cold, and flu, etc. A dog, no matter if it is a small puppy, young or old, Read more…