Antibiotics in Dogs – When are they useful- When not?

Medical advice is needed if the dog is sick, lies down in his place, and no longer eats. Often there is a disease that needs to be treated. In the case of bacterial infections, the vet prescribes an antibiotic for the dog. After a short period of treatment, the dog is fit again. But are there also side effects?

How Antibiotics work in Dogs?

If a sick dog is given an antibiotic, the drug destroys disease-causing bacteria in the dog’s body. It acts either as bacteriostatic, which means that it inhibits the multiplication of bacteria, or bactericidal, which kills the bacteria.

Most antibiotics belong to the first group, so they prevent bacteria from duplicating. Then, the dog’s immune system does the rest, destroying the harmful bacteria. The drugs of the second group, the bactericidal agents, destroy the cell structure of the bacteria and thus kill them. Amoxicillin for dogs belongs to this group.

So, an antibiotic is an effective remedy for a bacterial infection such as leptospirosis or pyoderma. But on the other hand, they do not affect viruses, fungi and parasites.

What different Antibiotics are administered

Bacteriostatic antibiotics: inhibit the division and multiplication of bacteria. The immune system fights the bacteria already in the dog’s body.
Bactericidal antibiotics: the cell structure of the bacteria is destroyed. The germs are killed.

Why different Antibiotics are used?

What are Reserve Antibiotics?

What Conditions Are Treated With Antibiotics in Dogs?

Antibiotics are used to treat a variety of infections in dogs, which can affect different parts of the body and be caused by various types of bacteria. The most common infections treated with antibiotics in dogs include:

How are antibiotics administered in dogs?

If the dog needs an antibiotic due to a bacterial disease, there are several ways to administer them. Antibiotics for dogs are available as capsules, tablets, ointments, juices and powders. Often, the veterinarian will administer a shot of antibiotics to the dog in the doctor’s office, and the owners will be given tablets to take home for further treatment.

How antibiotics can be administered:

When do antibiotics start to work in dogs?

If the antibiotic is administered as a capsule, juice or tablet, it enters the dog’s stomach via the esophagus. From there, it moves to the small intestine and is finally absorbed by the blood. After about 30 minutes to two hours, the concentration of an active ingredient in the blood is so high that the administered agent begins to take effect.

How quickly an effect of the antibiotics sets in depends on the form of administration:

Depending on the stage of the disease the dog is in, it may take one to two days before the dog’s general condition improves.

What must be strictly considered during treatment with antibiotics:

In many cases, the dog appears completely healthy again before the prescribed package of antibiotics is completely used. However, to prevent bacteria from gaining the upper hand again, dog owners must follow the veterinarian’s instructions strictly.

Can Overdosage of Antibiotics occur?

It is possible for dogs to overdose on antibiotics if they are given too much or if they consume the medication accidentally. Symptoms of an antibiotic overdose in dogs may include gastrointestinal issues such as vomiting, diarrhea, drooling, and loss of appetite, as well as central nervous system effects such as seizures or tremors.

If you believe your dog has overdosed on antibiotics, it is important to seek advice from a professional immediately. You can contact your regular veterinarian, a pet emergency center, or a pet poison control service like ASPCA Animal Poison Control or Pet Poison Helpline. The veterinarian may recommend inducing vomiting if the overdose occurred recently and may need to perform follow-up testing and treatment in person.

Can You Use Antibiotics for Humans also in Dogs?

It is not recommended to use human antibiotics for your dog, as the dosage that is appropriate for a person may be different than what is safe for a dog.

It is important to leave the diagnosis and treatment of your dog to a veterinarian, who is trained to determine the appropriate dosage and the best course of treatment. Self-diagnosis and self-treatment can be risky and may not address the underlying issue. It is best to trust the expertise of a veterinarian in these matters.

Potential Side Effects of Antibiotics in Dogs?

If dogs receive a specific antibiotic from the vet, owners can be sure the veterinarian carefully selected the agent. Unfortunately, antibiotic treatment may attack harmful bacteria and the body’s own beneficial bacteria. Some animals react with flatulence and diarrhea. This is a rare occurrence but is becoming more common with long-term therapies.

In addition, the bacteria that infected the Dog may develop resistance. Bacteria are very adaptable; especially if the treatment is stopped prematurely, they can become robust against the drug. However, if treatment is then resumed, the agent may not work. In these cases, the veterinarian will have to resort to another remedy.

Antibiotics can make the Dog tired. The Dog may have less desire to play because his body is on full blast fighting bacteria. However, after the treatment is finished, the Dog will quickly regain his usual energy level.

Most common side effects of antibiotic usage:

Caution: Simultaneous treatment with herbs may interfere with the effect of antibiotics.
IMPORTANT: Treatment with antibiotics should always be done after consulting your veterinarian.

The gut microbiome is the community of microorganisms that live in the gastrointestinal tract of an animal, including bacteria, fungi, and viruses. In dogs, the gut microbiome plays a vital role in maintaining overall health and well-being. It helps to digest food, produce vitamins, and protect against harmful pathogens.

A healthy gut microbiome is essential for a healthy immune system, and an imbalance in the microbiome can lead to various health issues. Factors that can affect the balance of the microbiome in dogs include diet, age, stress, and exposure to antibiotics and other medications.

Probiotics, which are live microorganisms that are similar to the beneficial bacteria found in the gut, may be helpful in maintaining a healthy microbiome balance in dogs.

It is important to consult with a veterinarian before giving probiotics to your dog, as the appropriate dosage and type of probiotic may vary depending on the individual dog’s needs.

The use of antibiotics can unintentionally affect the balance of bacteria in the body’s microbiome, leading to gastrointestinal issues and skin problems such as yeast infections.

Antimicrobial resistance occurs when bacteria become resistant to traditional antibiotic treatment due to overuse of antibiotics. This can make it difficult to treat infections in individual dogs effectively and can also pose a threat to public health by making it more challenging to treat diseases caused by antibiotic-resistant bacteria in humans and other animals.

Therefore, it is essential only to use antibiotics when necessary and at the appropriate dosage, as recommended by guidelines. Your veterinarian will carefully consider these factors when prescribing antibiotics for your dog.

Diseases in dogs where antibiotics are commonly used

Antibiotics for ear infections in dogs

If the dog suffers from acute inflammation of the ears (otitis), antibiotic treatment can help. First, the veterinarian will clean the dog’s ears and then analyze what caused the otitis. If bacteria are the trigger, he will prescribe ear drops with an antibiotic effect.

Tooth infections in dogs are often treated with antibiotics because the infection is usually caused by bacteria.

Intestinal parasites in dogs and antibiotics

If the dog has frequent diarrhea and vomits frequently, there may be a disease with Giardia. First, the veterinarian will try to destroy the parasites with the preparation of fenbendazole. If the remedy shows no or insufficient effect, an antibiotic is additionally used for Giardia in dogs.

Lyme disease after a tick bite – antibiotic can help

Anyone who owns a dog knows the problem: after a day in the great outdoors, a tick has bitten down on the dog.

This can transmit various diseases. One of these is Lyme disease. An antibiotic is used to treat Lyme disease in dogs to prevent the borrelia from spreading in the body and damaging it.

Most Common Antibiotics used for Dogs

There are several types of antibiotics that are commonly prescribed for dogs, including:

Read also: Keeping Your Dog’s Microbiome in Balance: Understanding the Risks of Antibiotic Use 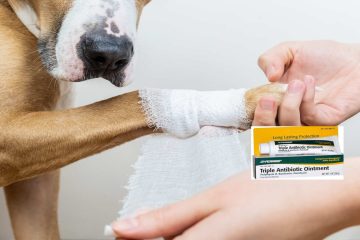 Protecting Your Pup: What to Do If Your Dog Licks Triple Antibiotic Ointment?

Dog owners may worry about their pet licking triple antibiotic ointment because it can potentially be toxic to their pet. The active ingredients in the ointment, such as neomycin and polymyxin B, can cause digestive Read more… 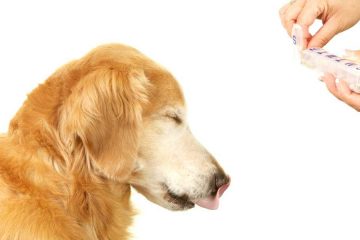 Antibiotic Use, Effectiveness, and Side Effects in Dogs

A sick Dog is every dog owner’s nightmare. Antibiotics are increasingly recommended for therapy during a visit to the veterinarian. After a bacterial infection, your dog will quickly recover and enjoy his walks again. However, Read more… What Are Natural Antibiotics For Dogs? – Quick Answer